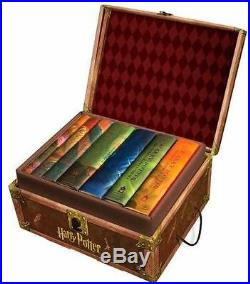 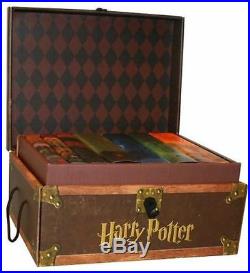 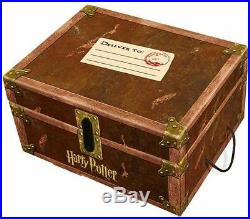 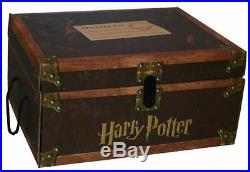 
Harry Potter and the Sorcerers Stone (Book 1). Orphaned as a baby, Harry Potter has spent 11 awful years living with his mean aunt, uncle, and cousin Dudley.

But everything changes for Harry when an owl delivers a mysterious letter inviting him to attend a school for wizards. At this special school, Harry finds friends, aerial sports, and magic in everything from classes to meals, as well as a great destiny that's been waiting for him... If Harry can survive the encounter. From an author who has been compared to C. Lewis and Roald Dahl, this enchanting, funny debut novel won England's National Book Award and the prestigious Smarties Prize.
Harry's back for his second year at Hogwarts, where the infamous Chamber of Secrets has been opened for the first time in 50 years. The monster that is unleashed is literally petrifying Hogwarts students (turning them into stone, that is), and who is the primary suspect? Add to this some enormous spiders, a Deathday Party, a ghost named Moaning Myrtle who haunts the girls' bathroom, and lots and lots of suspense, and you'll soon find yourself engrossed in another terrific tale in which magic does exist and good eventually triumphs over evil. This time, a dangerous escaped convict is on the loose -- a reputed madman with a mysterious tie to Harry's past. Harry's life is in danger, and his sorcery skills are tested to the limit.

Can he catch the criminal and discover the truth? In the pivotal fourth novel in the seven part tale of Harry Potter's training as a wizard, Harry wants to get away from the pernicious Dursleys and go to the International Quidditch Cup with Hermione, Ron, and the Weasleys. He wants to dream about Cho Chang, his crush (and maybe do more than dream). He wants to find out about the mysterious event that's supposed to take place at the Hogwarts this year, an event involving two other rival schools of magic, and a competition that hasn't happened in a hundred years.
He wants to be a normal, fourteen-year-old wizard. Unfortunately for Harry Potter, he's not normal -- even by wizarding standards. And in his case, different can be deadly. In the richest installment yet of J. Rowling's seven-part story, Harry Potter is faced with the unreliability of the very government of the magical world and the impotence of the authorities at Hogwarts.

Despite this (or perhaps because of it), he finds depth and strength in his friends, beyond what even he knew; boundless loyalty; and unbearable sacrifice. Though thick runs the plot (as well as the spine), readers will race through these pages and leave Hogwarts, like Harry, wishing only for the next train back.

The war against Voldemort is not going well as Harry enters his sixth year at Hogwarts. The obituary pages deliver constant surprises, and the Order of the Phoenix has already suffered losses.
As in all wars, however, life goes on. Sixth-year students learn to Apparate -- and lose a few eyebrows in the process. The Weasley twins expand their business. Teenagers flirt and fight and fall in love.
Classes are never straightforward, but when Harry receives some extraordinary help from the mysterious Half-Blood Prince, the situation becomes even more shocking. Rowling's blockbuster series comes to its dramatic conclusion in the seventh and final installment. Who will live, and who will die? Is Snape good or evil? These are just some of the questions that are answered in J.