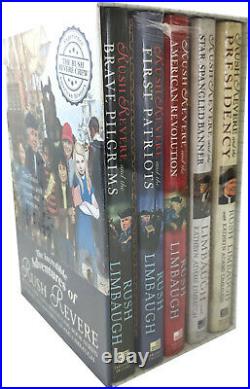 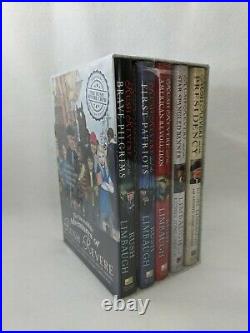 Book 1: Rush Revere and the Star-Spangled Banner: Go back in time to experience the fight for American freedom firsthand, on the floors of Congress and the battlements of Fort McHenry, and ask: - What do the words of the national anthem really mean? - Who created the first flag of the United States? - What did Dolley Madison rescue when the British burned the Capitol? - Where is the U. Why was George Madison Upset at the Constitutional Convention?

- When was the War of 1812 Fought? - How did James Madison become the Father of the Constitution?

Book 2: Rush Revere and the American Revolution: THE AMERICAN REVOLUTION HAS BEGUNAND RUSH REVERE, LIBERTY THE HORSE, AND THE TIME-TRAVELING CREW ARE READY TO RIDE INTO THE ACTION! Join us on this incredible time-travel adventure! Liberty, my wisecracking horse, our old friends Cam, Tommy, Freedom, and I are off to meet some super-brave soldiers in the year 1775. We'll be visiting with the underdog heroes who fought for American independence, against all oddsand won! But not before eight very real years of danger and uncertainty.

Be a part of Rush Revere's crew as we rush, rush, rush into a time when British rule had become a royal pain, and rebellion was in the air. We'll be on hand to see two lanterns hung in the Old North Church, prevent a British spy from capturing Paul Revere, and grapple with danger at the battles of Lexington, Concord, and Bunker Hill. Book 3: Rush Revere and the First Patriots: You say you want a revolution? Join Rush Revere on a thrilling ride as winds of change sweep across colonial America! Saddle up for an unforgettable history lesson - with Rush Revere and the First Patriots.

Go back in time to experience the first rumblings of American independence, and ask the people who were there: - What does freedom mean to you? - Why do you want to break away from Britain's rule? - What if some colonists don't feel the same? - King George III, why are you treating the colonists so unfairly? - What was the secret signal that led to the Boston Tea Party?

- Why did people yell "Treason" when Patrick Henry spoke? Book 4: Rush Revere and the Brave Pilgrims: So you think history is boring? A fellow named Rush Revere is about to change your mind, big-time! Saddle up for the most thrilling history lesson ever - with Rush Revere and the Brave Pilgrims. Go back in time to experience the Mayflower voyage firsthand, and ask the people who were there. Why do you want to leave Europe? - Who's your leader on the Mayflower? What food do you eat on board? - Where do you sleep? - Does the ocean make you seasick? - What will you do when we finally see land from the deck?

Book 5: Rush Revere and the Presidency Hey there, young readers! I cant wait to rush, rush, rush to history with our next adventure: a trip back in time to the first days of our country on its own two legs, free from British rule Whats that, Liberty?

Liberty wants me to say on its own. Anyway, as I was sayingfree from British rule and creating a new government for the people, by the people. When one of the time-traveling crew from Manchester Middle School decides to run for student-body president, I take them back to meet our first three presidents and first ladies.
So, join us as we head back to those amazing and important first years, when we got to make all the decisions. Turns out, its pretty hard to lead a whole new country! We had to make new rules for America and set the path for the country we would grow up to be. And who better to be our first-ever leader than the general who won the warGeorge Washington!

He was the father of our country and made some incredible decisions that still affect how we live our lives today! But even so, President Wash­ington knew that he couldnt stay president forever or we might end up with a king, just like England. Well watch as he makes his tough decision to step down to spend more time with Martha Washington and his adopted grandchildren, Nelly and Wash. Then well saddle up and ride into the presidency of John Adams, who followed in some very big footsteps with the help of his accomplished wife, Abigail.

Using advice from the early presidents, first ladies, and a former U. Congressman, the crew works to defeat an old nemesis. The question is will it be enough? What are you waiting for? Bring your curiosity and lets giddyup! Extremely Careful Packaging (Please check the comments on my feedback). The item "NEW Rush Revere Set of 5 Boxed Volume Collection Hardcover Book Limbaugh Gift" is in sale since Thursday, December 10, 2020. This item is in the category "Books\Children & Young Adults\Children & YA Fiction". The seller is "brandons7bargains" and is located in Buchanan, Michigan. This item can be shipped worldwide.